Texas Hunt Lodge has one of the best Bison - Buffalo Ranches in the World.  We hunt American Buffalo on a 3000 acre ranch in Kerr County and have a fantastic reproducing herd of Bison we hunt year-round ..in fact, we hold multiple Bison World Records for Crossbow, Archery, and Handgun. Year round, we offer awesome World Record Class Trophy Buffalo Hunts. There are no seasonal restrictions on hunting the Buffalo, or Bison, in Texas, which makes it a suitable trophy year round.  Texas Hunt Lodge claims many SCI and TGR World Record Buffalo Hunts over the Years

We typically let our hunters choose the method of hunting Trophy Buffalo that they prefer. Hunters of Trophy Bison Bulls and Cows can choose the Spot and Stalk method, Bow Hunting, Rifle Hunting, Black Powder, Safari Style Hunting, Handgun, as well as hunting from a Blind. We can accommodate hunters of any age and experience level, as well as hunters which have physical disabilities or may be confined to a wheelchair.

You will typically see from 20-50 Buffalo Bulls and Bison Cows while hunting with us. Our Record Class Buffalo bulls weigh 1200 -1500lbs, and have horns in the 17-20 inch range, some great Buffalo World Record Trophies have been taken recently.

We have a fantastic and very experienced local taxidermy studio that offers Buffalo Shoulder Mounts to our guests specifically for only $1795. Transportation of your trophy to this taxidermist is included in our package.

Our local meat processor's charge $1.25 per lb to process your Buffalo. You will typically get 200-350 lbs of meat from our Buffalo.

In America, the Bison is commonly referred to as Buffalo.  The only two types of Bison which exist today are the American Bison and European Bison.  The Buffalo is the largest terrestrial mammal in North America and Europe today.  Both species were hunted to near extinction during the 19th and 20th centuries but have since rebounded due to game and food management ranches throughout the United States.

The Buffalo has a dark brown coat that is dense and wooly around the neck and shoulders.  Buffalo stand about 6 ½ feet tall at the shoulder and can grow as much as 11½ feet long.  They Buffalo can weigh up to 2200 lbs.

Bison are born without their hump, or horns, and grow into maturity at 2-3 years of age.  They will continue to put on mass until around 7 years of age, and can live for upwards of 20 years.  Both male and female Buffalo have horns, though when they are born, they have only buttons.

Buffalo in the United States are typically raised for their lean meat, but the Buffalo makes an excellent trophy because of its size. 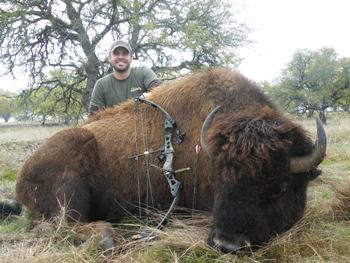 Included with the Buffalo Hunt Package 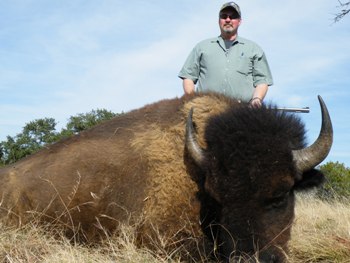 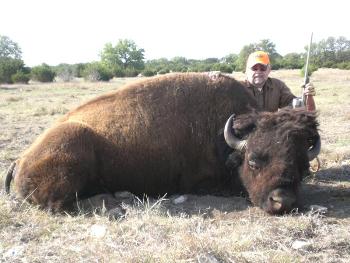 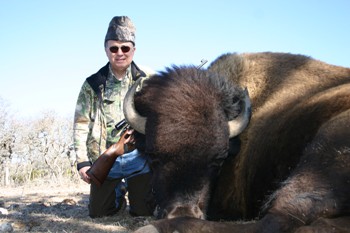 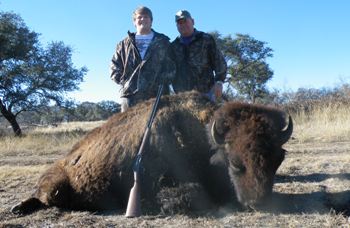 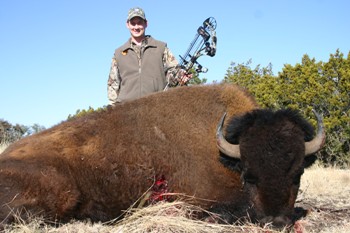 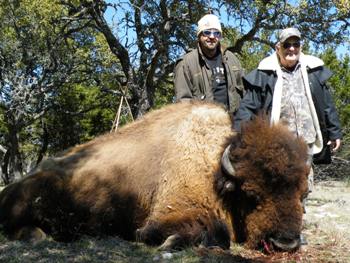 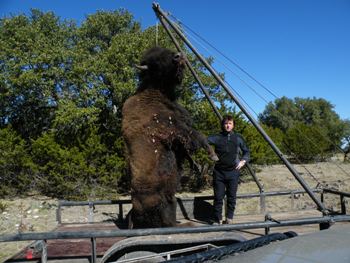 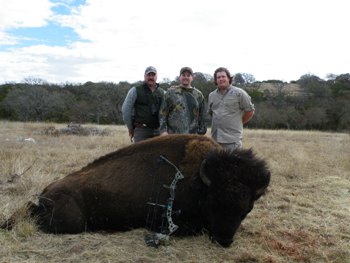 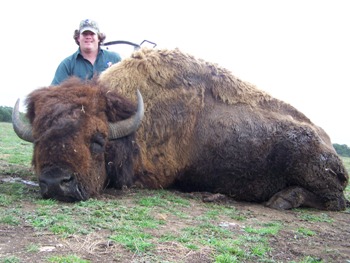 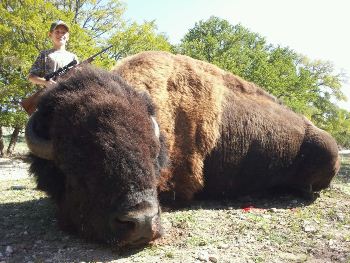 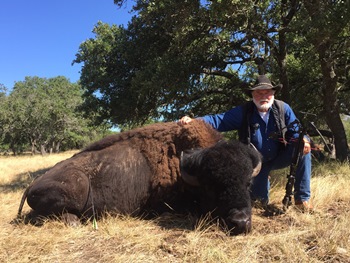 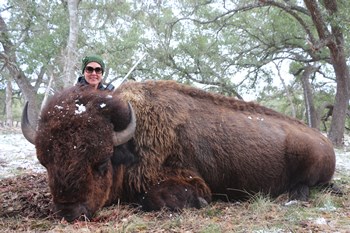 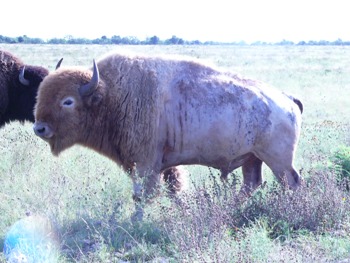 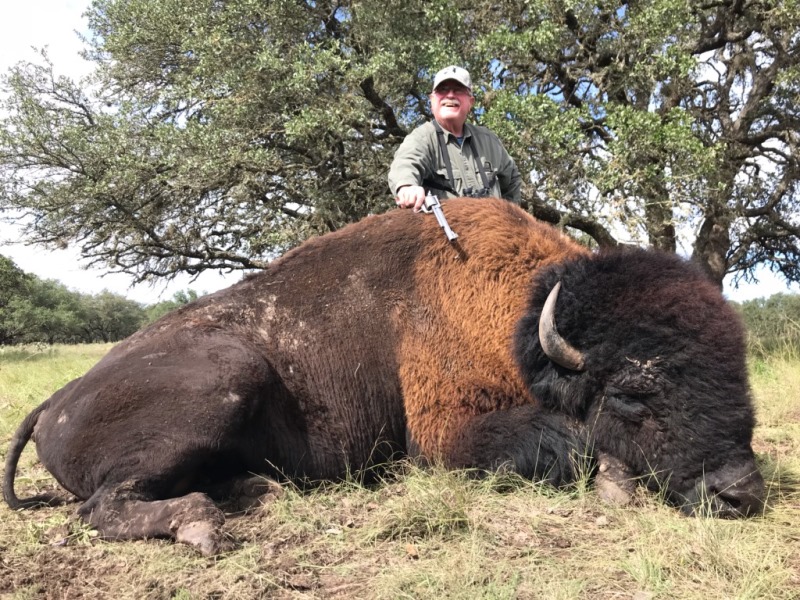 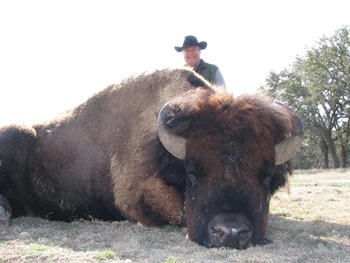 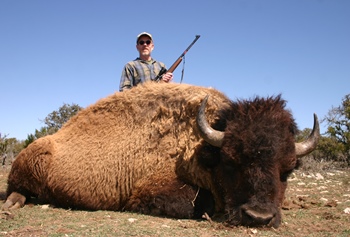 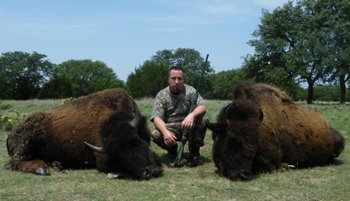 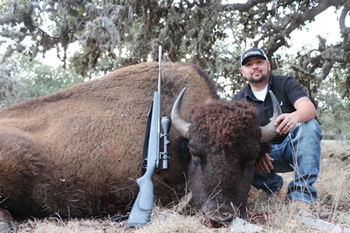 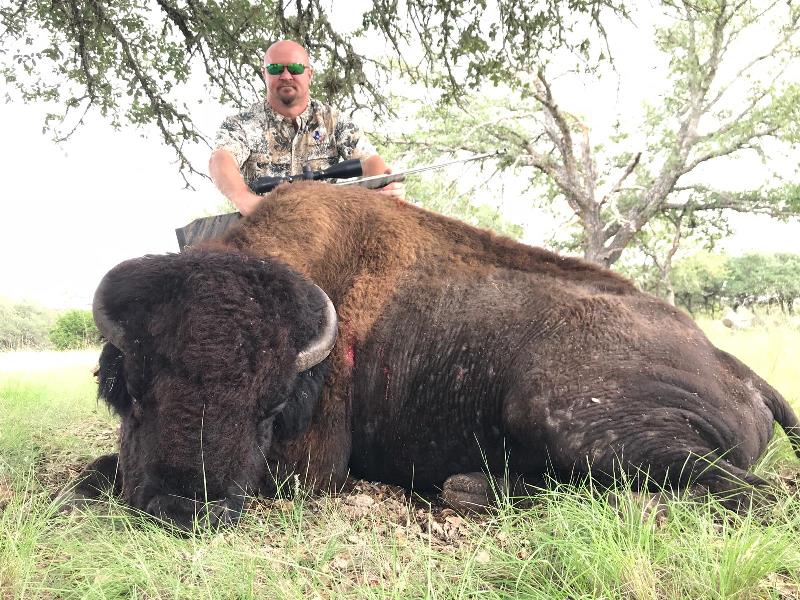 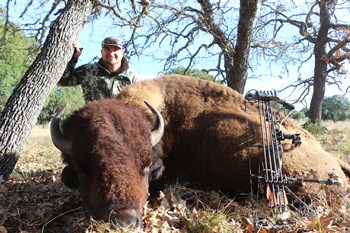 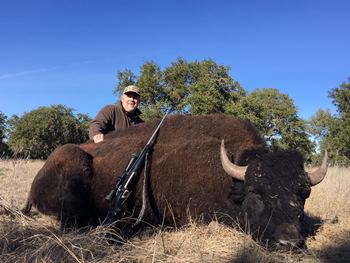