Texas Hunt Lodge will you put you on some Monster Wild Boar any time of the year.  Our Trophy Wild Hog hunts are one of the most popular hunts which we offer. There are no seasonal restrictions on hunting the Feral Hog in Texas, which makes it a suitable hunt year round.

We hunt Wild Hogs on our Texas Animal Health Commission Approved Hog Hunting Preserve just outside of Harper, Texas in Gillespie County. This is just 25 minutes from our lodge. We use our specially trained dogs to search for and bay the Wild Boars, then we hunt them with either a rifle, pistol or knife. This hunt is safe for the hunter, but can be dangerous for the Dogs and the Guides. We take very special care not to endanger the hunters, and our Hog Guides are very experienced with over 30 yrs of practice.

The Wild Boar Hunt which we offer is a "Guaranteed Trophy Boar Hunt". This hunt is for a Monster Wild Boar weighing approximately 200 lbs with 2 1/2 to 3 1/2 inch cutters and could be up to 4 to 5-inch cutters. This Hog Hunt is the real Deal. A Big Time Hunt for a Big Time Wild Boar that you can hang on your wall.

Feral Hogs, Wild Pigs, or Wild Boars are an old world species belonging to the family Suidae, and in Texas include European wild hogs, feral hogs, and European-feral crossbreeds. Feral hogs are domestic hogs that either escaped or were released for hunting purposes. With each generation, the hog's domestic characteristics diminish and they develop the traits needed for survival in the wild.

A mature feral hog may reach a shoulder height of 36 inches and weigh from 100 to over 400 pounds.  Wild hogs continuously grow tusks that serve as weapons and burrowing tools.  Wild boars live in groups called sounders.  Sounders typically contain around 20 animals, but groups of over 50 have been seen.  In a typical sounder there are two or three sows and their offspring; adult males are not part of the sounder outside of a breeding cycle, two to three per year, and are usually found alone.  The sows usually have litters of 8-12 piglets.  The wild hog will attack by charging if cornered or if they fear danger for their offspring.

Meat from feral hogs is extremely tasty and much leaner than pen-raised pork. The meat from older boars may be tougher and rank tasting if not prepared adequately. As with all pork, care should be taken and the meat well cooked. Otherwise, it should be prepared just like market hogs. The slower the meat is cooked, the more tender and tasty it becomes.

There is not a limited Hunting season on Feral Hogs in the State of Texas nor bag or possession limits, so they make a great hunt year round. 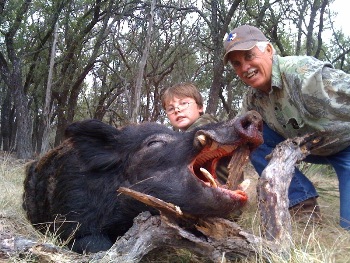 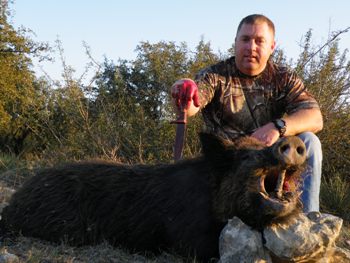 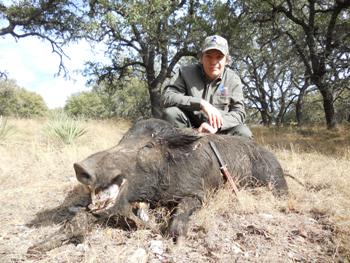 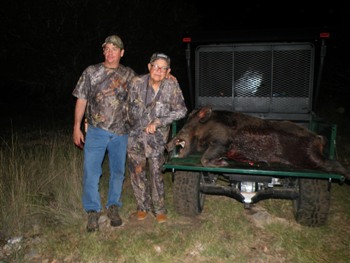