Texas Hunt Lodge allows the opportunity to hunt and harvest the very rare Trophy Arabian Oryx. Year round, we offer hunts for awesome Arabian Oryx. There are no seasonal restrictions on hunting the Arabian Oryx in Texas, which makes it a suitable trophy year round.

We typically have our hunters choose the method of hunting Trophy Arabian Oryx that they prefer, but from experience, sometimes the only way to harvest an Arabian Oryx is with a Rifle from 150-200 yards. We can accommodate hunters of any age and experience level, as well as hunters which have physical disabilities or may be confined to a wheelchair.

The Arabian Oryx is a very rare Exotic animal, thus we recommend booking your Arabian Oryx hunt 2-3 months in advance to ensure availability of your trophy.

We currently have availability for 4-5 Bulls that range in the 28-33 inch horn range. The Arabian Oryx bull that you take will be in the top 10 World Records. We will also provide the legally required "Cull and Take permit" which is necessary to harvest this endangered species, and have your bull entered into the SCI Record Book and Trophy Game Records.

The Arabian Oryx (Oryx Leucoryx) was native to the Near East, and was extinct in the wild until reintroduction in the 1980's.  Arabian Oryx were once widespread in Syria, Iraq, Israel, Jordan and throughout the Sinai and Arabian peninsulas, but were exterminated in the wild by 1972 from uncontrolled hunting by locals. Captive breeding programs have been underway since 1962 in the United States, Europe and some Arabian countries. Has recently been reintroduced in the wild in Oman, Jordan and Saudi Arabia.

The smallest Oryx and perhaps the most beautiful, the Arabian Oryx has a white body color contrasting with the dark chocolate markings of the head, neck, legs and tip of tail. The build of the Arabian Oryx is heavy and there is a hump over the withers. The Oyrx's tail is long, with a bushy tip, and the hoofs are large and rounded as an adaptation for sandy terrain.

The horns of the Arabian Oryx of both males and females are long, straight and gradually divergent. Females are similar to males but somewhat smaller, and have slimmer and sometimes longer horns.

The Arabian Oryx males reach sexual maturity at age 18 months; females as young as 12 months.  The gestation period for an Arabian Oryx is 8 to 8 1/2 months and they typically give birth to 1 offspring at a time.  The breeding season is all year, though heavy rains stimulate females to come into heat within a week. 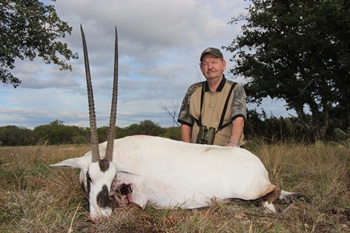 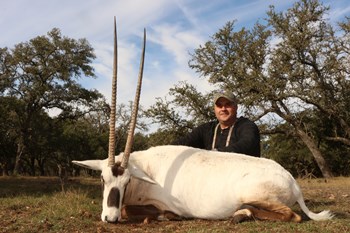 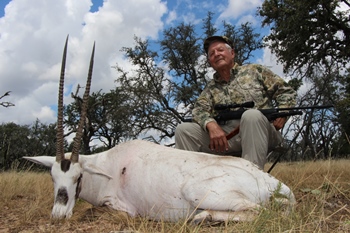 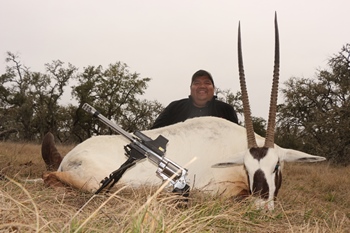 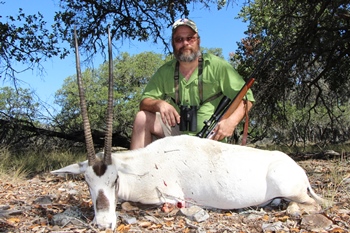 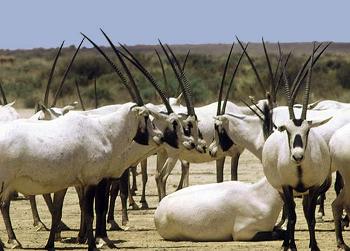