Texas Hunt Lodge allows the opportunity to hunt and harvest the Trophy Beisa Oryx for the record books. Year round, we offer hunts for awesome Trophy Beisa Oryx. There are no seasonal restrictions on hunting the Beisa Oryx in Texas, which makes it a suitable trophy year round.

We typically let our hunters choose the method of hunting Trophy Beisa Oryx that they prefer. Hunters of Trophy Beisa Oryx can choose the Spot and Stalk method, Bow Hunting, Rifle Hunting, Black Powder, Safari Style Hunting, Handgun, as well as hunting from a Blind. We can accommodate hunters of any age and experience level, as well as hunters which have physical disabilities or may be confined to a wheelchair.

The Beisa Oryx that we hunt typically have horns in the 24-28 inch range and weigh up to 400 lbs. The Beisa Oryx is very rare and must be booked at least 1-2 months in advance.

The Beisa Oryx (Oryx beisa beisa) is Native to East Africa north of the Tana River.  The Beisa Oryx is not distributed and hunted on private ranches in Texas.

The horns on the Beisa Oryx found on Texas ranches are the biggest in the world, providing for the ultimate trophies and hunting records.  Horn Lengths often exceed 29 inches with good Trophies in the 26-36 inch ranges.  A Male Beisa Oryx typically weighs 370 to 495 lbs and the females 250-415 lbs.

The Beisa Oryx appear similarly to the Gemsbok.  The overall color is Sandy Gray with no black on the rump or thighs.  The Black flank bands are wider than in the fringe-eared oryx, but narrower than in the gemsbok.  The Ears on the Beisa Oryx are large without a hair fringe.  The horns are similar to those on a fringe-eared oryx, but slimmer, and are shorter and less divergent than the gemsbok.

Beisa Oryx band together with other types of oryx and frequently hybridize producing fertile hybrids.  Hybrids with Gembok resemble Pure Bred Gemsbok but are usually smaller.

The Beisa Oryx males reach sexual maturity at age 18 months; females at 2 years.  The gestation period for Horned Oryx is 8 1/2 to 9 months and they typically give birth to 1 offspring at a time.  The breeding season is all year. 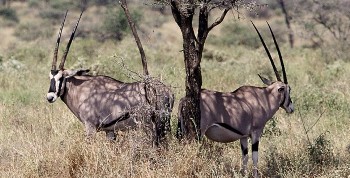