Eld's Deer Hunts Texas Hunt Lodge allows the opportunity to hunt and harvest the Trophy Eld's Deer that will be in the record books for all time.  Beginning in December of each year, we offer hunts for awesome Trophy Elds Deer. There are no seasonal restrictions on hunting the Eld's Deer in Texas, which makes it a suitable trophy from December to about the end of June, when the Elds Deer have antler.

We typically let our hunters choose the method of hunting Trophy Eld's Deer that they prefer. Hunters of Trophy Eld's Deer can choose the Spot and Stalk method, Bow Hunting, Rifle Hunting, Black Powder, Safari Style Hunting, Handgun, as well as hunting from a Blind. We can accommodate hunters of any age and experience level, as well as hunters which have physical disabilities or may be confined to a wheelchair.

The Elds Deer you hunt will have main beams in the 30+inch range and will score well in the Trophy Game records of the World and SCI Record Books.

Eld's Deer (Cervus eldii), also called Brow Antlered Deer or Sangai and Thamin, is a critically endangered species. The Eld's Deer was named after British Lt. Percy Eld, its European discoverer in 1838.  Native to southeastern Asia from eastern India to Vietnam and the Chinese island of Hainan. There are three subspecies of Eld's Deer throughout the world: eldi (Manipur Eld deer or sangai) from Manipur State in India; thamin (Burmese Eld deer or thamin) from southern Burma; and siamensis (Thai Eld deer or Thai thamin) from Thailand east to Hainan.

The Eld's Deer is a medium sized deer standing approximately 3.5 ft at the shoulder and weighing up to 330 lbs.   The Elds Deer antlers rise at a right angle from close-set pedicels. The antlers differ from those of any other deer in that the long brow tine and the main beam form a continuous curve. They are forked at the tips and, in older males, there are a number of short tines growing from the upper part of the beam. There also may be one or more short tines where the brow tine and the beam meet. 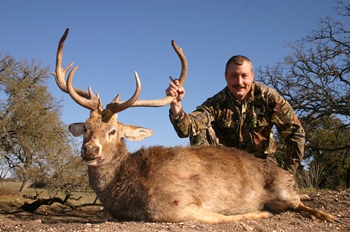