Texas Hunt Lodge allows the opportunity to hunt and harvest the extremely rare Greater Kudu you'll want to hang on your wall. This animal is extremely rare in the United States and we have access to only a few at a time. Year round, we offer hunts for awesome Trophy Greater Kudu. There are no seasonal restrictions on hunting the Greater Kudu in Texas, which makes it a suitable trophy year round.

We typically let our hunters choose the method of hunting Trophy Greater Kudu that they prefer. Hunters of Trophy Greater Kudu can choose the Spot and Stalk method, Bow Hunting, Rifle Hunting, Black Powder, Safari Style Hunting, Handgun, as well as hunting from a Blind. We can accommodate hunters of any age and experience level, as well as hunters which have physical disabilities or may be confined to a wheelchair.

The Greater Kudu Antelope that we offer on our Texas Hill Country Ranches are raised locally on private Texas ranches. You can expect a 49-54 inch Kudu when hunting with us, and sometimes the odd 60 inch Kudu comes available.

The Greater Kudu (Tragelaphus strepsiceros), is a large, elegant African antelope.  Native to the southern and eastern Savanna areas of Africa, a Greater Kudu is one of the top game trophies of Africa, and of the world.

The Greater Kudu weighs from 440 to 660 pounds, and stands 54-60 inches at the shoulder.  The Kudu antelope has long legs, a hump on its shoulders, and magnificent corkscrew-shaped horns. The Greater Kudu's color is gray to reddish-brown, with white stripes, and there is a white facial chevron. The Kudu has a brown mane which continues as a white dorsal crest, and there is a fringe of long brown and white hair from the chin to the brisket. The Kudu's horns are long and keeled, growing upward in 2-3 open spirals. The Female Kudu are similar but hornless.

In Texas, the Greater Kudu breed all year, but in Africa, rut for 2 months between January and April.  The gestation period for the Greater Kudu antelope is 7 to 8 months and they give birth to 1 young.  Both the male and female Kudu reach sexual maturity at 17 months.

The Greater Kudu are excellent jumpers and can leap over an 8 1/2 foot fence.  They can hybridize with other spiral-horned antelope species such as the Eland.  A Sable bull may kill a Kudu bull if put into the same area together.

The Kudu's Horns typically range from 40 inches to 48 for Trophy Kudu in Texas.  Trophy Kudu in Africa grow horns up to 68 inches in length with 11 1/2 inch bases. 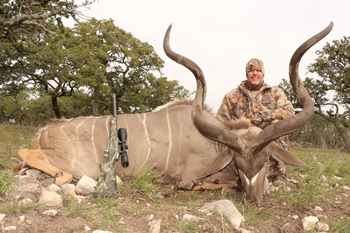 Included with the Kudu Hunt Package 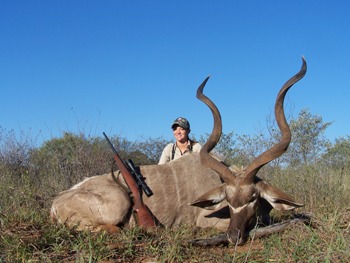 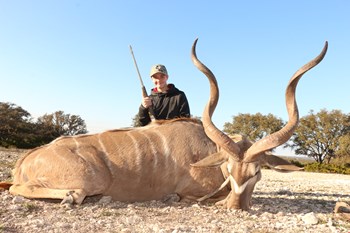 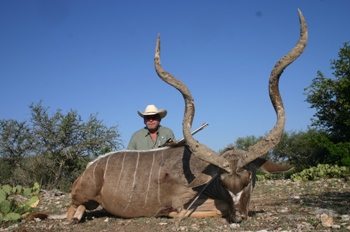