Texas Hunt Lodge allows the opportunity to hunt and harvest the Trophy Roan Antelope you'll want to put in your trophy room. Year round, we offer hunts for awesome Roan Antelope. There are no seasonal restrictions on hunting the Roan Antelope in Texas, which makes it a suitable trophy year round.

We typically let our hunters choose the method of hunting Trophy Roan Antelope that they prefer. Hunters of Trophy Roan Antelope can choose the Spot and Stalk method, Bow Hunting, Rifle Hunting, Black Powder, Safari Style Hunting, Handgun, as well as hunting from a Blind. We can accommodate hunters of any age and experience level, as well as hunters which have physical disabilities or may be confined to a wheelchair.

The Roan Antelope is a very rare species to hunt in Texas and must be booked in advance to ensure availability and ranch/preserve access.  We also offer Roan Hunts at our Lodge in South Africa at very affordable rates Africa Hunt Lodge Roan - Only $7500

Roan antelope (Hippotragus equinus)is a savanna species antelope originally from Africa.  Similar in appearance to the Sable Antelope, the Roan is much lighter in color as the Sable is Black when mature.

The Roan Antelopes form harems of five to fifteen animals with one dominant male.  Roan Antleope are notorious for fighting amongst themselves for dominance of the herd often brandishing their horns while both are on their knees.

The roan is larger than the sable, but has smaller horns. It is a large, grayish-brown, horse-like animal with shoulders higher than hindquarters, conspicuous black-and-white facial markings and long, tufted ears that droop down at the tip. The tail has a black tassel. The horns (both sexes) are sickle-shaped, ringed and only moderately long. Females are similar to males, but slightly smaller and with smaller horns. 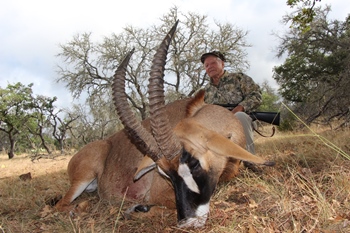