Texas Hunt Lodge offers the opportunity to hunt and harvest the rare Trophy Sitatunga. Year round, we offer hunts for awesome Sitatunga. There are no seasonal restrictions on hunting the Sitatunga in Texas, which makes it a suitable trophy year round.

We typically let our hunters choose the method of hunting Trophy Sitatunga that they prefer. Hunters of Trophy Sitatunga can choose the Spot and Stalk method, Bow Hunting, Rifle Hunting, Black Powder, Safari Style Hunting, Handgun, as well as hunting from a Blind. We can accommodate hunters of any age and experience level, as well as hunters which have physical disabilities or may be confined to a wheelchair.

The Sitatunga is a very rare species to hunt in Texas and must be booked in advance to ensure availability and ranch/preserve access. Our Average Sitatunga will score top 5 in the United States with low to mid-20-inch horns.

Sitatunga (Tragelaphus spekei) is a medium-sized antelope that has evolved for living in Africa's swamps and flooded forests.

The back of the Sitatunga is hunched, and the coat is long and shaggy, the legs are long and thin, the hoofs are elongated with widespread tips and greatly enlarged false hoofs, and the tail is tufted. Coloration of the Sitatunga is gray to brown, with white markings on cheeks and throat and an incomplete white facial chevron. White stripes and spots may be present or absent, varying with the race and location.

Only the male Sitatunga Bulls grow horns, which are long and smooth, carry two keels and form 1-1/2 to 2 spiral turns on mature specimens. Female Sitatunga are smaller, without horns, reddish-brown in color, and are more likely than males to have conspicuous white markings.

The Sitatunga is native to Africa, where it is found in swamps and marshes south of the Sahara. Four subspecies of Sitatunga are recognized in Africa. 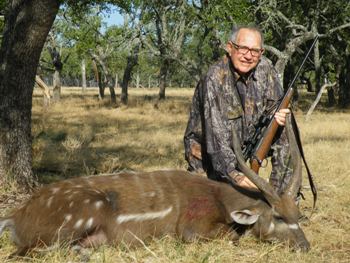 Included with the Sitatunga Hunt Package